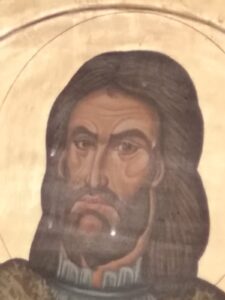 Dear friends and followers of the spirit of our knightly ancestors!

We have the hounour and spiritual obligation to share with you an omen, also referred to as a “miracle”, in Christian tradition, which we discovered a few days ago.

In the eve of Vidovdan, one of the most important icons of the Royal Order of Knights – the icon of Saint Great Martyr Tsar Lazar began streaming myrrh on many spots, mostly in the region of his head.

Myrrh-streaming has been recorded a lot of times at many places around the world. Although it is mostly connected to icons in churches, it can also occur in the homes of Christians.

In Christian tradition, myrrh-streaming is undoubtedly a “sign from above”. Most of the time they warn believers to repent and to strenghten their faith.

The teachings of orthodox holy fathers tell us that myrrh-streaming should be perceived with fear and trembling. It is clear that it is a mysterious phenomenon, but it is uncertain whether it is a herald of the good or the bad.

Does Saint Tsar Lazar in this way give us the sign to be cautious because troubles and suffering are ensuing, or is it a joyous sign that the Serbs are again turning to God, renewing their souls and ancient knight code?

Nevertheless, it should be referred to carefully,  without exaltation. Mark the Evangelist says: “You can only admire the thing you cannot understand, but don’t you dare dismiss it…”

On 28 June 1389/6897, i.e. 15 June according to the old calendar, the Battle of Kosovo – one of the greatest battles of the medieval knight history, happened at Gazimestan.

Vidovdan is the most important Serbian holiday and it represents the remembrance of all the Serbian knights killed in all the wars.

Dear admirers of the Serbian knight code and heritage,

As the Board of Directors of the Royal Order of Knights have already announced, the KNIGHT FEST which was planned to take place from 6 till 12 April 2020, cannot happen due to the state of emergency in the entire world, caused by the virus pandemic.

However, this state of emergency should be accepted and used as an opportunity to calm down, unwind, pray, do something creative and nice, enlight our soul and life.

Hug your spouse, your children and parents, play, talk, socialize with them, laugh, exercise, cook a nice meal for yourself and the people you love.

Dear friends, we decided to acknowledge the traditional date of the festival, therefore we suggest that you spend your time constructively, and watch together the programmes of our previous festivals, which we selected for you, and which we will joyfully post on our facebook page https://www.facebook.com/vitezfest/, from Monday, 6 April to Sunday, 12 April when the festival was originally planned.

We will play for you the programmes enriched with hope, faith, love and knighthood.

We would like to bring you joy, give you strength, calm and award you.

The knight is light, joy and hope.

The spirit of the knight and princess is endearing and it appeases man.

It gives us hope to behold the future in faith.

We would like you to enjoy with us, to open your hearts and fill them with the KNIGHT FEST and love!

With faith in the knight victory!

CHRIST IS RISEN! – HE IS RISEN INDEED!

Board of directors of the KNIGHT FEST

On behalf of the Board of  Directors of the Royal Order of Knights, we would like to inform you that, this year, the Knight Fest – the International Festival of knight culture and tradition, at the Belgrade Fortress, which is organised in cooperation with the City of Belgrade, the Belgrade Fortress, Tourist Organisation of Serbia, with the blessing of his Holiness patriarch Irinej of Serbia, under the auspices of H.R.H. Princess Linda Karadjordjevic, will not be able to gather its knight friends from all over the world, its partners and participants, as well as its audience – children and their parents, families and tourists, as it has been doing for the last 17 years on the most beautiful holidays dedicated to children – Lazarus Saturday and Palm Sunday.

The Knight Fest which was planned from 6 to 12 April 2020, cannot take place due to the state of emergency all over the world, which was caused by viral pandemic.

The Royal Order of Knights and Knight Fest will be patient and, with faith and love will do their best to postpone and hold their scientific, cultural and educational part of the festival under the name of the “Week of Knighthood”, as soon as possible. This sector of the festival, in cooperation with the Museum of Yugoslav Cinematography, represents a very important part of operations of the Knight Fest, because it represents to our audience the chosen people of our spiritual, artistic, scientific, historical, diplomatic, and music scenes, through quality lectures, mini concerts, as well as classic knight films.

The Week of Knighthood through its programmes points at the period of knighthood, which not only represents wariors with the code of conduct which must be obeyed by every single knight, but also the spirit of the knighthood time which represents faith, hope and love. Such spirit and vow used to rule Belgrade, Serbia and beyond, and it is our longing to return it.

Bravery, sense of duty and sublimation of everything righteous in knights’ behaviour were present then, as well as today, but it is necessery to bring back the knight light to our hearts, so that the ancient and divine knight heritage can survive…which is a dream and ideal of a child within us.

The Knight Fest will inform you joyfully, as soon as possible, of the date of this year’s Week of Knighthood!

With faith in the knight victory!

CHRIST IS RISEN – HE IS RISEN INDEED! +

Board of directors of the KNIGHT FEST

This year on 08.06. Novak Djoković was presented with the prestigious award „Golden Knight – Saint Despot Stefan of Serbia“, at the official Salvation day award ceremony of the Knight Fest festival, in organisation of The Royal Order Of Knights. The sword for industrial achievements was awarded to Dragan Simović.

END_OF_DOCUMENT_TOKEN_TO_BE_REPLACED

Pedja Todorović, artist and master of wall painting held a lecture “Dragon, simbol of light“ at this years Knight Fest.

“I read a book caled ’’The Witches’ Sabath’’ a long time ago in 1995. and that is the firt time I have encountered the Serbian mythology, and I was mostly intrigued by the caracter of the dragon. Since then I have started to learn and investigate about dragons, not just as anthropomorphic beings, but as well as dragon heroes who are a big part of our history and our past.“ Stated Mr. Todorović.

END_OF_DOCUMENT_TOKEN_TO_BE_REPLACED

Since his early childhood Mr. Todorović was interested in the written word and the cirilic letter.